Professor Meral ÖZGÜÇ is pioneer scientist of the research and discovery work of biobanking in turkey that led to the understanding of the most suitable way to establish biobanking network in turkey. Professor Meral Özgüç has 84SCI articles in the area of Human Genetics/Genomics/Rare Diseases with 1832 citations.She is member of Euroean,Middle Eastern and African Society for Biopreservation, Biobanking (ESBB), National Board member of The European Association for Predictive,Preventive & Personalised Medicine (EPMA) and Public Population Project in Genomics-P3G.
Hacettepe University Medical School was established in 1967 on the foundations of a pediatric hospital that began operating in 1957. Due to its high rate of consanguinity, Turkey has an pportunity to offer scientific contributions in the field of genomics of autosomal recessive diseases by defining new phenotypes and identifying new genes and relevant pathways. Against this background, funding was obtained from the Technological Development Fund of Turkey (TTGV) in 1995 with financial support through a grant from the World Bank to establish a biobank for rare diseases. Between 1995 and 2006, the Bank was supported by the Scientific and Technological Research Council of Turkey and since that date the infrastructure is sustained by Hacettepe University. Families are referred to the biobank after clinical examination by respective departments. A document of medical and personal information together with the informed consent form accompanies samples, signed by the medical attendee and the principle medical doctor responsible for the unit. By 2013,the biological registry holds a total number of DNA samples (31.000) from 5700 families and 1200 cells/tissues (lymphoblastoid cell lines, fibroblast, muscle, brain and other biopsy specimens). The main contributions to the DNA registry are neurological (46%), metabolic (19%), nephrological (15%), gastroenterological (9%), immunological/haematological (5%), chest diseases (3%) and dermatological disorders (3%). The repository of the DNA/Cell Bank has facilitated collaborations leading to the identification of new disease genes.

During the seminar, Professor Meral ÖZGÜÇ introduce the biobanking history, development, and the critical points to establish the biobanking worknet. Professor Neşe Atabey introduced the BBMRI, the duty of national nodes, the fellowing plan of BBMRI-tr, and the difficult we face currently. Professor Mehmet ÖZTÜRK attent the meeing. 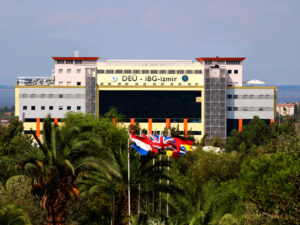